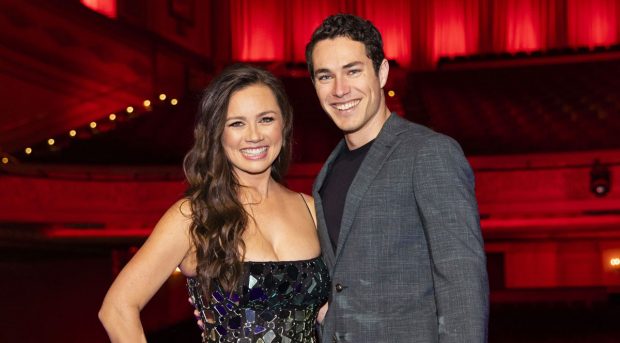 When Des Flanagan left rural Victoria for the bright lights of theatre, he had no idea the role of a lifetime was awaiting in the wings of the Moulin Rouge!

When Moulin Rouge! premiered in 2001, it became the latest in a long line of successful Australian films, particularly for writer/director Baz Luhrmann. Grossing over $179 million and earning two Oscars, the musical extravaganza was somehow destined to join the many screen-to-stage jukebox musicals that flourished through the following decades.

When the stage version finally opened on Broadway in 2019, it immediately drew accolades, including five Drama Desk Awards, seven IRNE Awards and currently holds fourteen Tony nominations. As it opens in Australia, theatregoers are excitedly buying up tickets, but there is no greater fan than the production’s male lead actor Des Flanagan.

“I first watched Moulin Rouge! back in 2019 and still think about it, because it’s so overwhelming,” says Flanagan. 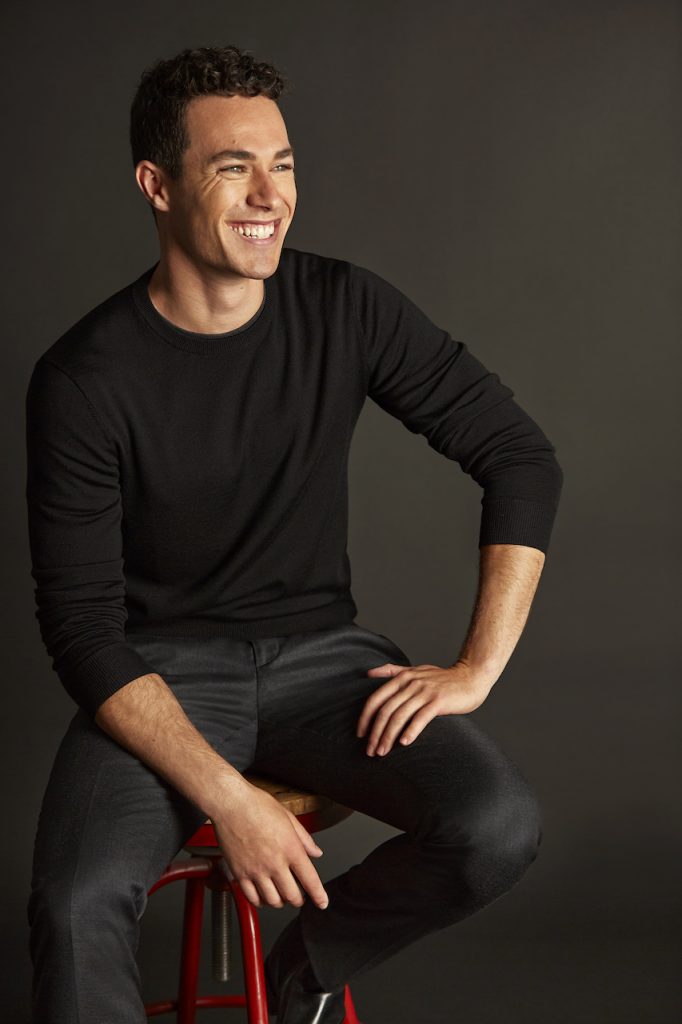 “The story is so pertinent to what’s going on at the moment, in putting on a show at all costs. I know it’s going to be so well received, because it’s such a welcoming and warm show.”

The story, set in Paris during the Belle Epoque period, sees young composer Christian, meet and fall in love with Satine, the lead cabaret star of the famed Moulin Rouge! However, Christian finds competition with the nightclub’s patron ‘the Duke’ and a deadly love triangle sets the scene.

“We were pretty inventive, and would choreograph dance numbers to ABBA Gold on a Saturday night.”

For Flanagan, taking on the role of the bohemian Christian sits close to the heart. Growing up in the regional Victorian town of Beechworth, his character’s foray into the colourful world of theatre is not un-removed from his own experiences.

“Moulin Rouge! was such a massive part of my childhood, particularly my teenage years,” says Flanagan.

“I come from a country town, and like Christian, found myself amongst all these wonderful creatives who really turned the world upside down. I resinate with the character very much, because I’m pretty impulsive emotionally. Christian is someone who is so comfortable in expressing himself. He’s unapologetic and unashamed about his expressions, particularly through his creative outlet and his love. That was a wonderful thing to see for a young man in my formulating years, and I’d like to think it’s carried through into my adult life.”

A creative now himself, Flanagan first found inspiration within his own family, inspired to follow in the footsteps of his older sister who also enjoyed musicals. 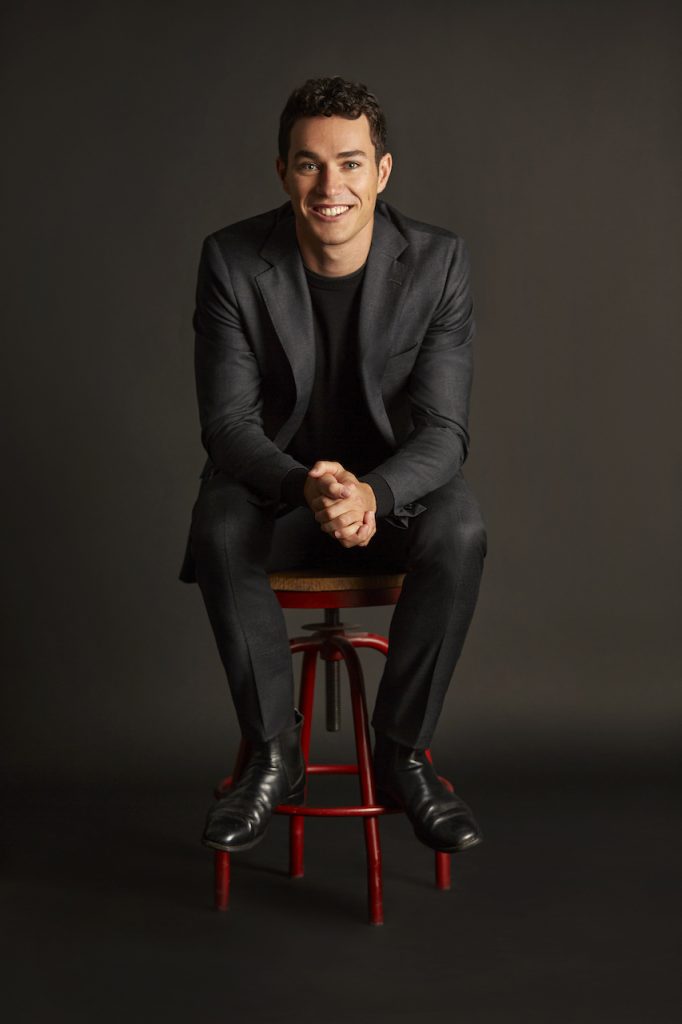 “I was always around performance in some capacity,” he says.

“I’m one of four siblings, and we used to put on little concerts. Being the youngest, I was kind of there by association, but when you’re exposed to that kind of activity, you pick up a bit of intrigue. We were pretty inventive too, and would choreograph dance numbers to ABBA Gold on a Saturday night. My older siblings coerced my younger sister and I into a Does Your Mother Know routine, which now has a special place in my heart!”

What started as family fun, eventually paved the way for Flanagan to study at the prestigious Victorian College of the Arts, but the choice to study musical theatre was an evolving journey, rather than one mapped out.

“I come from a country town, and like Christian, found myself amongst all these wonderful creatives.”

“I didn’t really have a big bang kind of moment,” he says.

“It was more just all accumulative into my life. It wasn’t something I saw as a career path, but just getting into the VCA was a massive achievement. I hadn’t done any real formal training prior to the audition, but was fortunate enough to be given a place which set me on this path.”

The actor’s other credits include Handa Opera’s West Side Story, Grease the Arena Experience and a stint on Neighbours as ‘T-Bone’, but when it comes to a break-through role, Moulin Rouge! is definitely it!

“This has to be my first big break in terms of professional highs. To be honest, I’ve never thought of dream roles and I didn’t even know this role existed two years back. So I guess this is the dream role. It means a lot and I think it showcases what I can do.”

The stage production of Moulin Rouge! extends beyond the average jukebox musical, with a mash-up of 70 songs covering music from the last 160 years. As well as songs from the movie, new additions include works from Adele, Katy Perry, Rihanna, Beyoncé and Sia. 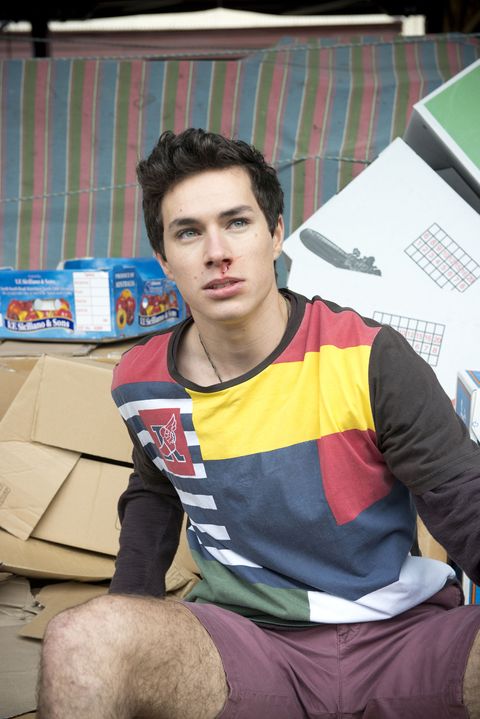 Playing opposite Flanagan in the role of Satine is Alinta Chidzey, whose widespread credits include Anita in West Side Story, Mary Magdalene in Jesus Christ Superstar and Velma Kelly in Chicago. Along with the extended cast, Flanagan feels he’s amidst a special group of peers.

“It’s so special to sing the beautiful love medley, Come What May with Alinta,” he says.

“But my favourite moment in the whole show is during Diamonds Are a Girl’s Best Friend, because it’s the one time where I don’t do anything but watch Alinta and the incredible company belt out this great tune. Plus, the choreography is out of this world! I kind of lose Christian there for a while and become Des, with my jaw hitting the floor!”

“I consider many of these people in this industry as mentors. There’s always something someone has said to me at just the right moment that has stuck, including within this current company. Every time I’m part of a production there’s always someone who has a little gold nugget that resonates with me.”

“I know what it’s like to be that audience member who wants to get up and join everyone on stage.”

Fortunate as he feels, the actor not only believes in taking advice, but to also persevere in what is known to be a high-staked and competitive industry.

“I was so fortunate by the chance I was given,” says Flanagan.

“There are people I studied with, who have auditioned for five years in a row. But then, they still get in. As a new grad, I think one of the greatest qualities you can have is tenacity and perseverance. I’ve been out of uni now for almost six years, and I think my greatest quality became the reframing of so much rejection. I thought about what I could take from those experiences, and also what the other side took from it as well.”

As far as challenges go, many will obviously compare Flanagan’s Christian to that created some twenty years back through Ewan McGregor. But as Flanagan points out, it is a character that each actor interprets in his own way, whether it is himself, McGregor or Aaron Tveit, who currently plays the role on Broadway.

“The public will have Ewan McGregor already implanted in their head,” he says.

“But having watched the show on Broadway, I found you surrender to a different story and take on board whoever the actor is. The story is so easily told from someone who resonates with it on a personal level. I think the biggest challenge for me will be the emotional journey, because it explores the spectrum of Christian’s emotions from start to finish. I’ll probably find the stamina of an eight-week show to be the most challenging!”

Of course the past year has presented the mother of all challenges for the theatre world, with the COVID-19 related on-again, off-again rollercoaster ride of productions. With openings, closings and postponements, finally treading the boards must be one of euphoria for any actor.

“I took a lot from the year off, and I don’t think I could have done this role without it. I certainly reflected on who I am, and what my capabilities are. It’s such a liberating feeling to now have theatre back, including every little moment. There’s nothing that’s tiresome now, and you just want to work relentlessly. We all show so much more gratitude now for these opportunities and experience. There are still shows sadly being postponed, like Phantom of the Opera, but we just have to live for every moment.”

And while theatres are reopening around the country, there are many now doing just that. With shows such as Hamilton, Come From Away and Harry Potter and the Cursed Child continuing to draw and enthral crowds, Moulin Rouge! is set to join in with a much-welcomed fantasy and escapism.

“Moulin Rouge! is a liberation of who we are as humans and who we actually want to be,” says Flanagan.

“It’s so well-rounded and all encompassing of emotions, and I have the honour and privilege to express all of this in the show. I know what it’s like to be that audience member who wants to get up and join everyone on stage. There’s really something in this for everyone!” 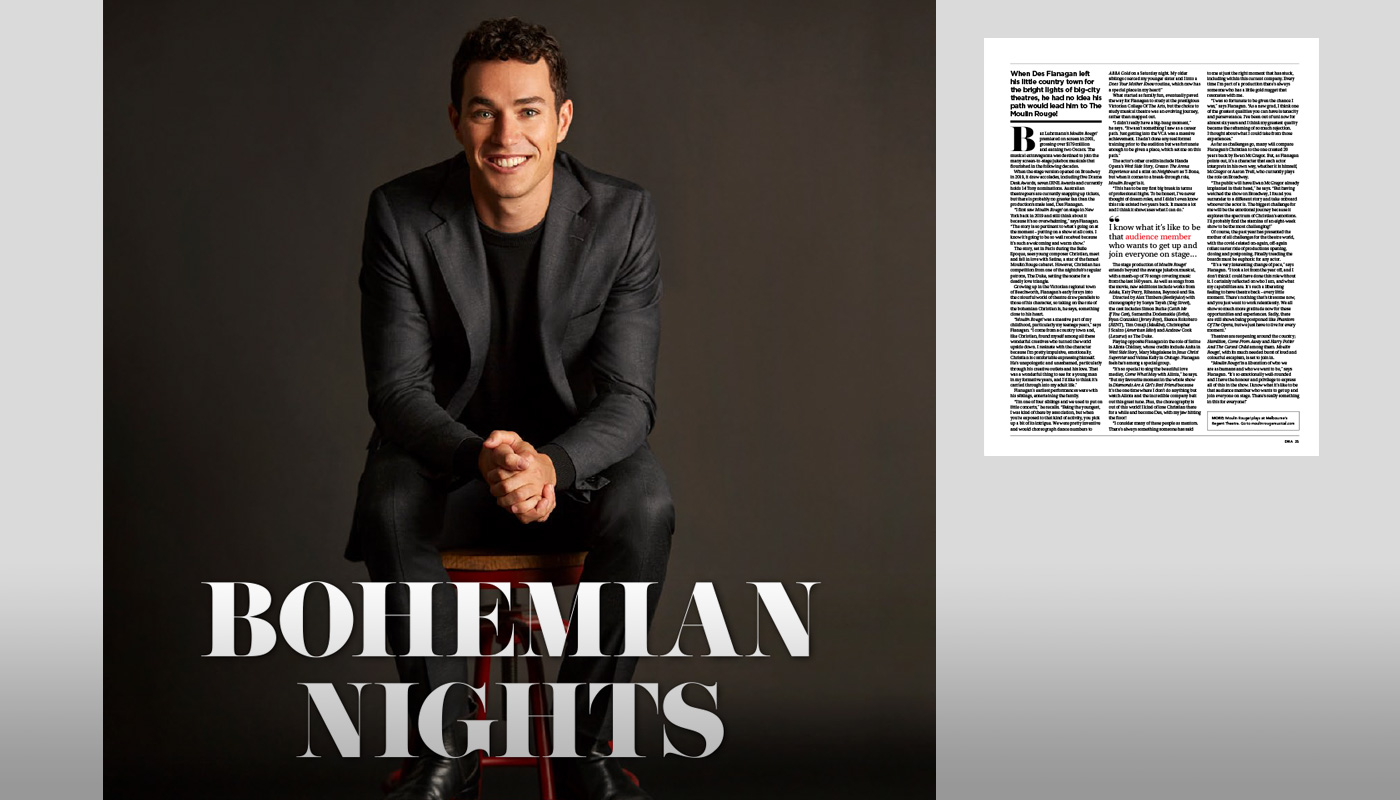